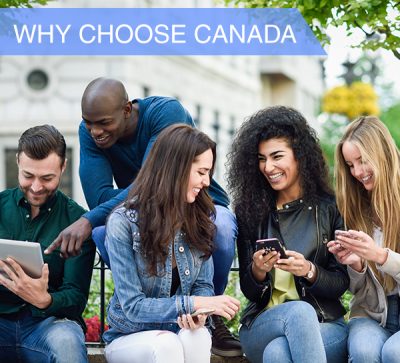 Canada is the 2nd Largest country by geographical size and relatively smaller in terms of population. As a former British Colony Canada follows the British style of governance, A democratic Parliament and UK monarch is head of state. Depends mostly on the US for trade and Economy, The currency is Canadian Dollars.

Canada Accepted a global diversified culture, both English and French enjoy official status. English and French both are official languages. Other indigenous peoples make up around 4% of the Population. Apart from all these things, it’s one of the richest countries in terms of economy and land is full of opportunities.

Canada has consistently managed itself as one of the most attractive educational destinations for international students. Due to its global recognition, affordability, high earnings, and abundance of advanced research opportunities its Canadian academic excellence is growing. The rigorous process to sets higher benchmarks in educational sectors recognized all over the world. 13 Canadian universities are in the Top 200 and 3 of them are in the top 50 globally.

Full-time students if they’re registered regular students don’t require any work permit any longer, a legal study permit is automatically translated as a work permit, either on campus or Off-campus. 20 Hours Allowed Per week Legally. Throughout the educational period Planned breaks allows you to work full time, while no separate document is required? International students can make $29- $30 Per Hour or an average of $57000 annually. (Estimate)

After graduation from the eligible institute, you’re required to apply for a post-graduation work permit to continue working.

Following are not eligible for working on or off-campus

Contact at WorldWide Education Service or submit an inquiry online.